A Food Bank Việt Nam volunteer on a motorbike with the meal boxes the charity delivers throughout HCM City. Photo Courtesy of Nguyễn Tuấn Khởi.

HCM CITY— Free meals, vegetable, and accommodation have been provided to people especially the poor, social welfare shelters, and frontline volunteers as well as health workers in COVID-19 prevention and control in HCM City during the 15-day social distancing period.

They have been told to stay off the streets and at home during the 15-day social distancing mandate by the city under Directive No.16.

The motorbikes with the food are parked in the middle of the alleys so that people can keep a safe distance.

Before the social distancing began, the food was mostly handed over to needy people at the charity’s Bếp Yêu Thương (Loved Kitchen) in Bình Thạnh District’s Ung Văn Khiêm Street.

The volunteers have been issued cards that allow them passage around the city to deliver the meals.

Khởi said he had also got in touch with sponsors in many provinces to ask for donations of vegetables and others needed for making food at the city’s social welfare shelters.

Two days later it brought more than 20 tonnes of vegetable from Đà Lạt and delivered to other social welfare shelters. 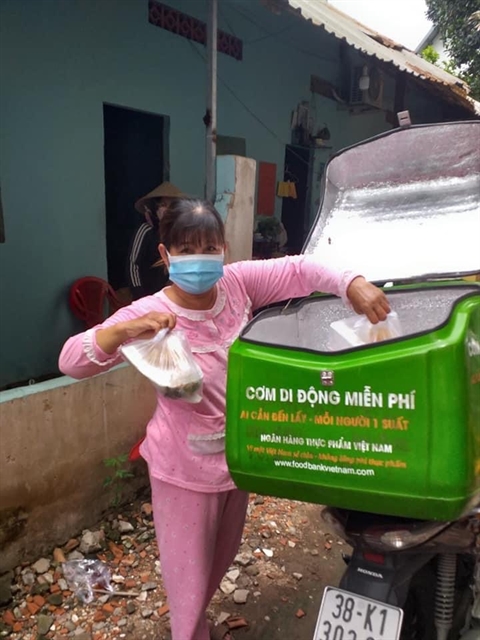 A woman in HCM City gets free food from the Food Bank Việt Nam on July 10. Photo Courtesy of Nguyễn Tuấn Khởi.

The HCM City Youth Social Work Centre on July 11 cooked meals for 101,844 poor people and people living in locked-down areas, the highest number following 37 days of charity. Initially it had planned to feed only 28,000 people daily.

Because of the social distancing, volunteers have to stay at the centre to cook, Võ Quốc Bình of the centre, said.

“The city has more and more areas being locked down because of COVID-19 patients there. Lottery ticket sellers and garbage collectors do not earn anything during the social distancing period. Free meals are imperative for them.”

The centre gets orders for food from people’s committees, the Việt Nam Fatherland Front and Hồ Chí Minh Communist Youth Union in districts, its volunteers cook the needed food, and the agencies placing the orders collect and distribute the meals.

The centre has solicited donations to ensure it has enough vegetables, fruits, meat, and others.

Bình said: “Previously, traders in the city’s wholesale markets donated them, but the markets are closed temporarily. We contact vegetable farmers in the city and other provinces to seek donations.”

Many individuals, locals and overseas Vietnamese, and companies have donated vegetables to people in locked-down areas and opened charity places dubbed 0 đồng food stores and mini marts in many places to benefit thousands of needy people.

The so-called rice ATM machines continue to be used during the fourth wave of COVID.

In District 12 for instance there are six 0 đồng food stores and an ATM machine.

Đỗ Kim Ngọc told Tin Tức online newspaper belonging to the Việt Nam News Agency that she has a four-month baby and her family’s income depends on her husband and has been affected by the pandemic.

Vegetables, rice, noodles, and milk being provided by the Việt Nam Fatherland Front Committee of District 10 help her family survive, she added.

The Food Bank Việt Nam is working with Đinh Quốc Huy, who owns the Ambassador Hotel in District, 1 to provide free accommodation for frontline health workers, police officers and volunteers involved in fighting COVID, and even others who have difficulty finding accommodation.

Khởi said, “Many of the health workers, police officers and volunteers taking samples from the community cannot go home late at night.”

Huy said, “They also need temporary accommodation while they wait for test results. Besides, they are afraid they might transmit COVID to their family.

“My hotel does not have many guests and so I provide free accommodation to these people. They feel assured while working.”

Khởi is asking CP Livestock Joint Stock Company to provide food for the volunteers and other workers and seeking other aid for their laundry, electricity and water at the hotel.

At the 12 checkpoints at the city’s gateways, the Department of Transport and the Youth Social Welfare Centre have redesigned 12 old containers for police officers, health workers and volunteers there to rest between work.

The containers are equipped with electricity, air conditioners and exhaust fans.

The Việt Nam Fatherland Front Committee units in districts have called on landlords to reduce rents especially for workers and people affected by the outbreak. VNS